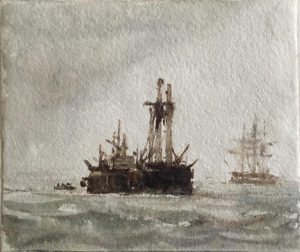 Shipping pictures were a favourite of Petit’s at this time, and there are several from the Thames, and Harwich. This very small view at Portsmouth is unusual. Delamotte would later say that Petit in his early views of ships demonstrates full mastery of his subject as well as with architecture. 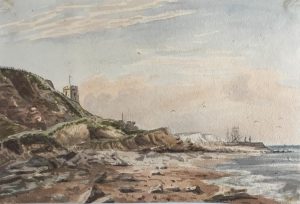 Folkestone looking east with the Parish Church of St Mary and St Eanswythe and the pier in the far distance which was built in 1810. This, and the album from which it comes is exceptional for its bright colour. The album includes at least 20 pictures from the Kent coast, dateable between 1824 and 1835 by the architecture. Petit married at Wye Church, Kent in June 1828 just before taking up his position at Bradfield. 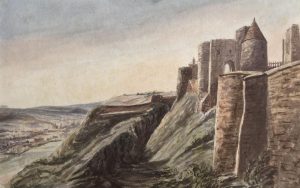 From the same album, larger than usual, Petit is already finding unusual angles to capture, although the texture of the buildings is not as well presented as in later work. 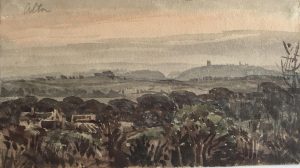 The hills in the north of Staffordshire was a particular favourite subject for Petit, with several albums taken in that region in the early part of his career before he started to spend most time abroad. 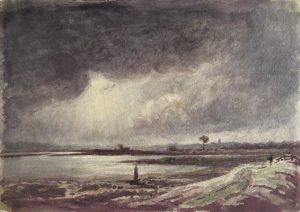 Petit worked as a curate at Mistley, and Bradfield, Essex from 1828 until 1834, and this appears to have been drawn during the earlier part of that period, when he often used a purplish palette. Nature from the beginning had a religious significance for Petit as might be understood by the church tower on the horizon. One wonders the extent to which this reflects his mood at the time, but it is certainly a stark contrast to 1.1 and 1.2 above. 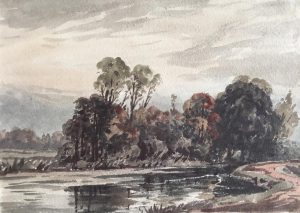 Tixall is just east of Stafford where Petit also painted the gateway shown on the homepage. Here, taken from the canal side, the turrets are just visible on the left. This picture, and the next are included in the forthcoming book Petit’s Tours of Old Staffordshire, and the exact spot where they were drawn can still be visited today. 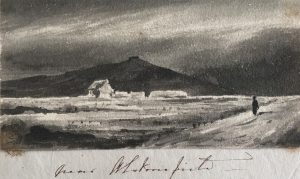 There are several dark grey and light grey moonlit washes of uncertain date among the early albums, of which this is one, anticipating the monochrome churches of the early 1830s. It is also small even for this period when the size was generally smaller than later. Alstonefield is in the Staffordshire Peak District. The barn shown still stands.