John Louis Petit painted almost entirely in watercolours. His earliest dateable works are from the late 1820s and the latest from the last year of his life 1868. He was prolific, although only around half of what he did seems to have survived.

In style Petit extends the pre-impressionistic approach of many British watercolourists from the earlier part of the century. Petit is unique, however, in continuing this tradition as late as the 1860s after Turner and after the Pre-Raphaelite ascendancy in British art became established, thus furthering the bridge from British watercolourists towards impressionism.  Petit’s art, both landscapes and his many church portraits are serious. The landscapes especially aim to capture the spiritual wonder of nature, and avoid the ‘prettiness’ of conventional Victorian art. In doing so Petit reaches for what Ruskin was calling for, ironically since his rough style is in direct contrast to the Pre-Raphaelites with whom Ruskin is usually associated.

Petit is also unique in not painting for the market. Nearly all his work was exhibited and admired widely at his lectures, but then lay hidden for 120 years in one line of family until being dumped in regional auctions in the 1990s. Only for the past few years has any research been carried out.

On this page sections describe 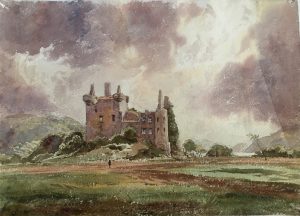 An illustrated essay by the major collector Ian Cooke (1934-2019) is attached here.

The Evolution of Petit’s Painting Style

This categorisation follows that of the British Art Journal article Vol 18 No 2 2017, and is illustrated in the sections of the exhibition pages of the website.

Petit’s earliest known watercolours tend to be attractive but perhaps more typical of watercolours of the 1820s and those known are mainly landscapes often around Staffordshire. De Wint is the strongest influence that has been remarked, although it is not confirmed if they met or if Petit took lessons from De Wint.

In the early 1830s, while a curate at Bradfield in Essex, 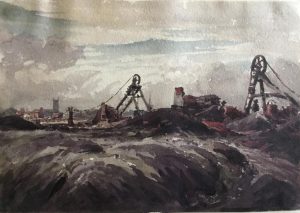 Petit’s art seems to come under the influence of Samuel Prout as his depiction of architecture becomes highly refined and texturised and he starts to adopt dramatic viewpoints and compositions. At the same time he often uses a limited monochromatic dark grey or dark purple pallette. He visits Holland and Belgium. Churches, and shipping pictures start to predominate, although there are also unique Black Country landscapes featuring mines and factories.

Later after retiring from his curacy in 1834
this sombre mood softens until dramatic colour starts to reappear in 1838. Again Staffordshire and  Derbyshire so far seem to have been the commonest subjects. By 1840 Petit has visited most parts of Britain, and journeyed several times on the continent, gathering examples in preparation for his first book, Remarks on Church Architecture. The colouring is positively vibrant in the 1839 trip through southern and northern France. At this stage and from now on the majority of his pictures are drawn to convey the character or effect of medieval churches in their communities, from near or far, to demonstrate beauty, harmony, solemnity, power, or just the centrality of the church in its community.

A year or two after this book has been published 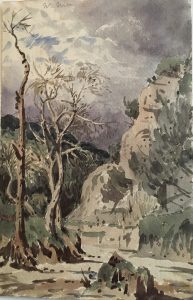 , when Petit starts to become  embroiled in architectural debate the vibrant colour diminishes and only returns briefly in the 1860s. Through the 1840s pictures are more restrained. From around 1845, when Petit starts to exhibit, pictures are kept loose in folios labelled top left verso, prior to that they were glued into albums. For the trip to central France in preparation for another major book Architectural Studies in France there are few landscapes until the work is completed and Petit visits the Pyrennees.

The late 1850s, after the success of this book is assured, sees one of the most important periods of Petit’s art, with a slightly higher proportion of finished landscapes. These are the years of his large public lectures/exhibitions. Most pictures are 37x26cm size. Even ones where the colouring and finish is limited can carry exhibition labels attached from the  back. The late 1850s see huge variety in travel abroad: Germany and east to Prague, Italy and France (55, 56); Corfu, Athens, Constantinople and Italy (57); Southern France, Spain and North Africa (58-9); and in addition trips in each year as far north as Scottish islands and into Wales.

The pace slackens only a little in the early 1860s when Petit is spending time building the Caerdeon chapel in 1861-2. He still manages several trips to France and Ireland (1862), and then in 1864-5 the 6 month trip to Egypt, Syria and Lebanon, full of blues and yellows not seen since 1839. His last years include many impressionistic landscapes around Upper Longdon and even several of his pets.

Petit is important artistically and as a topographer. 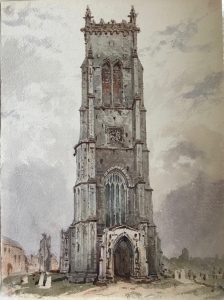 found to be scrupulously accurate.

Petit’s churches and church views predominate by number. Together they represent a remarkable  topographical collection of several thousand with historical importance in showing medieval buildings and their surrounds as they were when painted.

Yet Petit aims far higher than the antiquarian draughtsmen of the 17th and early 18th centuries, whose pictures have been described as the pictorial equivalent of a list – the facts as they present themselves. Petit always aims to present something of the character of a building or scene, how the building comes across to an observer, how it feels in its setting. It is this which can give even his most architectural sketches something more.

Petit is working just as photography is starting, pioneered by his friend Philip Delamotte, which would soon destroy the market for pure topography. Petit uses and commissions photography and comments that for semi-distant views the subject comes out far too small. He sees his watercolours as complimentary – photography for close up architectural detail and pure topography, his sketches for ‘effect’.

Much more important, in our age, are the innovations that Petit achieved. As with any talent which is unique it needs time to be appreciated. If it looked like or similar to the art of others it could not have much value. 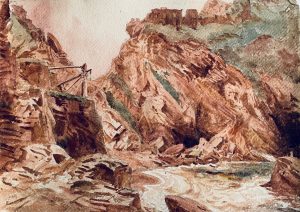 to appreciate precisely because it lies firmly within the British watercolour tradition. One can recognise not just De Wint, but elements of David Cox and John Sell Cotman the other pre-impressionistic watercolourists, as well as Samuel Prout for architectural texture. This is almost certainly no coincidence. Petit remarks how it is the duty of artists in whatever discipline to study and make use of what has been achieved and then try to take matters further.

While there are elements of ‘taking further’ before 1845, this comes to the fore in the 1850s and 1860s, with his rough impressionistic landscapes to convey the emotion of the scene at the expense of detail. What would  eventually become unremarkable a little later on the continent, and in the 20th Century in the UK, we can recognize as extraordinary for its time and context.

Appreciation of Petit the artist has been hindered by the manner that his art has come down to us.

The Dispersal of the Family Hoard

The big difference between Petit and other artists of the day is that Petit was not professional, ie not commercial, selling work to live. He never tried to sell, though occasionally gave away, watercolours, drawings or illustrations. On the one hand that  gave him huge freedom – he was imaginative and experimental; on the other hand his work was not naturally distributed, no market evolved and his lesser works were not pruned as with commercial artists. 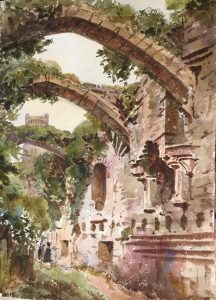 descended in one branch of the family until the 1980s. A few hundred of his later sketches went to other family members and few of these found their way onto the market, but none of his earlier so far as one can tell, because they had all been pasted into albums.

The main hoard was accidentally abandoned, following the death of Petit’s great niece in 1957. By this time many, up to one third, had suffered damage (see example of Brinkburn Abbey, 1856, next below) and they had been mixed up with those by his sisters. New owners dumped what was left into auctions during the 1980s and the 1990s, in large lots of 100 to 300 each, mostly at Sotheby’s Billingshurst,  and at least 6 lots went through Bearne’s of Torquay in 1992. This is obviously a disastrous way to introduce a practically unknown artist. Dealers bought watercolours for a few pounds each and were happy to sell even the best for £100. Probably around half were sold in this way.

A further problem arises as a result of this dumping. Pictures dispersed cheaply are neither framed nor maintained properly. Around half of those we find sold during that period have suffered further damage from sun or acidic mounts. 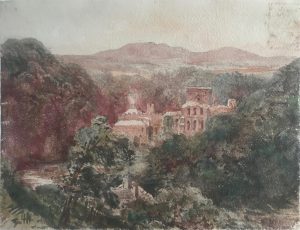 and lack of recent care must be added one further problem. The auctions mixed up Petit’s pictures with those of his sisters which had been stored  together in separate folios.

Attribution and The Circle of Petit

On many of his later trips (1855 on) Petit was accompanied by one or more family members painting alongside him in a similar style, presumably following his example and emulating to some extent his work.  Pictures were almost never signed by either Petit or his family.

In mixing up folios somewhere down the line and in the auctions around 20% of family watercolours were scattered, not distinguished by dealers, and can hang around on ebay. Some detailed information is available on a separate page here. Where there are dates written on the back attribution is possible.

Nearly all of his pictures were not dated until 1854, but after that they will carry a date on the back, and sometimes followed by a number indicating that more than one was completed on a day.

From 1845 or a little later pictures were no longer pasted into albums but started to carry labels indicating the folio in which they belong. These typographed labels top left verso can give a rough guide to dates until 1854 when dates appear as well as the labels.

Prior to 1845 work can be harder to date. Sometimes, 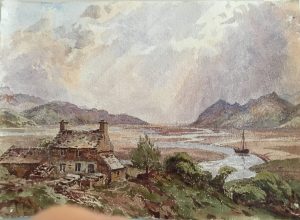 such as in 1838 or 1839 there are some dates on mounts. Occasionally Petit paints an event (such as the dismantling of the old tower at Canterbury Cathedral in 1832). If not we have some rough ideas based on the style, the mounting paper or the location of the subject or its subsequent use in a publication.

There are four public museums where Petit’s work is held:

Other museums have individual examples, Wolverhampton and Walsall known to us.

Archives also have pictures, one collection of which is important: 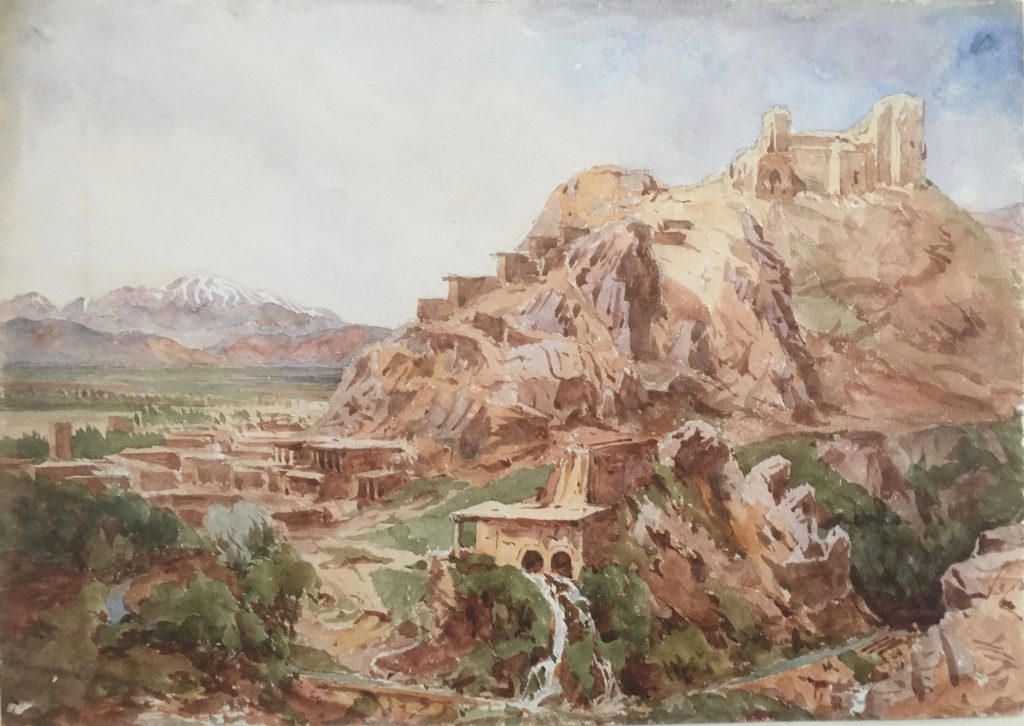