This exhibition (updated July 2020) is organized to show examples of each of 6 main styles that Petit exhibited during his career, more or less chronologically as set out on the Art page, and simplifying the groups set out in the British Art Journal (2017). After each lead picture, 1, 2, etc there is a drop down entry to others of that style 1.1, 1.2, or 2.1, 2.2 etc. Differences from the previous version are more pictures in each category, but only 6 categories. Circle pictures are in a separate group at the end.

A distinct presentation of highlights from the Ian Cooke Collection together with this major collector’s essay on the artist is shown here.

Petit’s early landscapes, until around 1835, are mainly views in the midlands or the south east. Petit is said to show similarities to the looser, pre-impressionistic watercolourists of the early 19th Century, especially de Wint, but also Cotman and Cox. 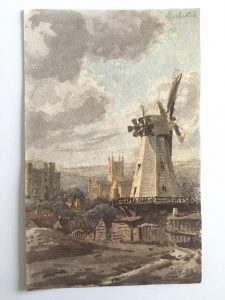 During his stay at Bradfield in Essex he often travelled across the estuary to North Kent and there is a group of Rochester views all from one album, from which this comes. The paper was somewhat  weaker than he later used which means that few are in exhibitable condition despite the care of their workmanship.

This group consists of shipping pictures especially around Harwich and the river Stour, where Petit was working as curate from 1828-34; pictures from the Black Country, and churches and ruins from the Midlands, south of England and the Low Countries. Just as his early landscapes follows de Wint, so his early buildings draw a lot from Samuel Prout, whose drawings from the Flanders and the Low Countries he admired, and with whom he was acquainted. Yet he developed a more original and equally powerful presentation focusing on the architecture and reflecting a bleak mood. 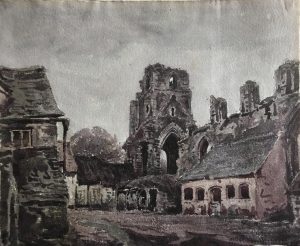 This captures the pathos of the ruined abbey, of which there are so many across the UK. It is a subject which he would often return, especially in the mid-1840s (see section 4).

After the monochrome, there is a more colourful phase in Petit’s art. This includes trips in the UK and on the continent in preparation for his first book: Remarks on Church Architecture.  Beauvais cathedral on the home page is also from this period. This colourful, even exuberant, phase also only lasts around 5 years until his conflict with the Ecclesiologists started. 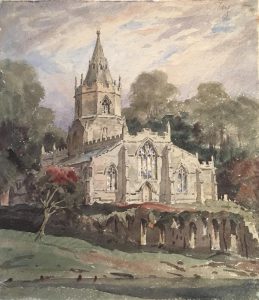 One of Petit’s favourite subjects and one of the few churches that figures three times in his writings – in his first two books and an article. This watercolour was used as the basis for the main illustration in Petit’s article on Tong Church in the Archaeological Journal in 1845.

This group represents a transition from the colourful and carefully finished work of the late 1830s and early 1840s, towards the sketches that would dominate Petit’s later years. One starts to see an underlying reddish tone that in later years would dominate the sketches, and a lack of peripheral features to concentrate on getting the essence of the subject. There are ruins, churches and a few landscapes all from the UK. There are no known continental trips until 1850. 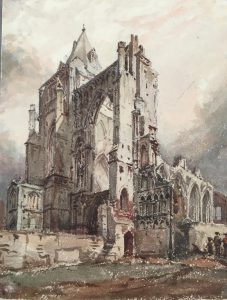 Petit argued that original Gothic was a product of a much more violent, ‘savage’ society, which Victorian England would not want to emulate (as implied by Ruskin). Petit’s 1845 pictures of ruined abbeys such as this of Crowland are designed to show thisn historic violence in contrast to picturesque ruins.

The architectural sketches were Petit’s main occupation for the last 20 years of his life, assembling an enormous collection from which to present his writing and speaking. Many are hasty notes not intended for public view, but many were finished, albeit still rough, for exhibition at his lectures. Particularly important are those reproduced in his later publications: his third major book Architectural Studies in France (5. – 5.2) and later articles. 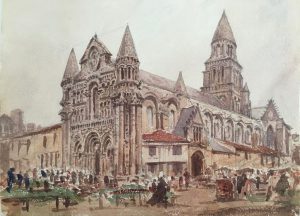 This is reproduced on page 104 of Architectural Studies in France. Typically architectural sketches give minimal context and colour, they are designed as a portrait of the building to present its character, or effect. Here the bustling market is integral to the position of this church, so it is shown but roughly so as not to distract.

Apart from the architectural sketches at various times Petit produced works which are clearly more artistic and may be his most significant legacy. These show the range of his talent, right up to his death in 1868. Most impressive are the awe-inspiring landscapes and atmospheric town views which demonstrate the power in his art (6-6.2), though he was also capable of quieter landscapes and vignettes (6.3-4) and a wide variety. 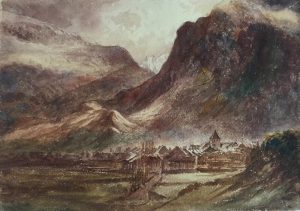 1853 is the first proven visit to the Pyrennees, around Pau, an area he was to return to several times over the next 10 years. On each occasion one can find dramatic mountain views – ‘God’s works’ as Petit would call such natural beauty, in contrast to which man’s architecture cannot be compared

For a description of the Circle who painted with Petit see the Circle page in the top menu. For circle pictures, click here