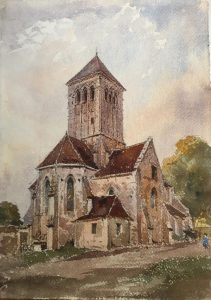 This drawing was reproduced for the Anastatic Society album of 1857. Anastatic reproduction was done from a copy made in special black ink, therefore the watercolour was finished for another purpose. 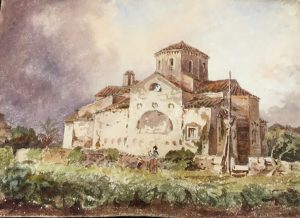 Petit made his first trip to Greece and Turkey in 1857, presented his thoughts to the Royal Institute of Architects in 1858, and wrote them up in an 1866 article for the Archaeological Institute after his subsequent trip to the Middle East in 1865. A different view of this Corfu church is illustrated in the article. All three views were well finished, enough to be shown at the RIBA meeting, unlike many from this trip. 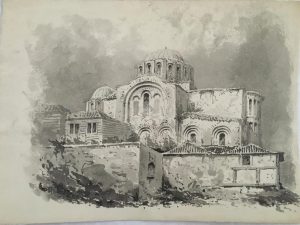 This was used as an illustration in Petit’s article in Archaeological Journal “Remarks on Medieval Architecture in the East, part 1” 1866 vol XXIII. However Petit first painted the Pantocrator on his trip to Constantinople in 1857, and it is not clear if he returned there on the way back from his trip to Syria and Egypt in 1865. Whatever the timing, the interesting aspect of this picture is its finish – completely unlike the sketches he took on the spot at any time, or the finished sketches for presentation shown in section 7. He likely prepared this at home for exhibiting in support of his speech on the subject, at RIBA in 1858 or the Architectural Exhibition Society in 1866. We have seen only one other similar – Buildwas Abbey on the home page, although others may well exist. 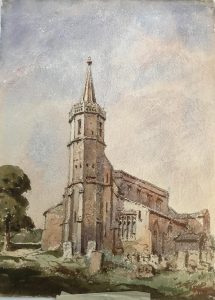 Taken during an earlier trip in 1857 through the UK and up to Scotland, this well finished sketch has the remains of Petit’s paper exhibition label centre bottom 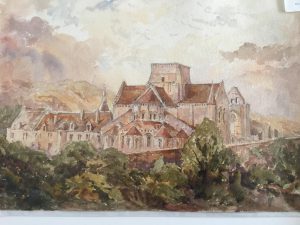 Another church-landscape, but still focused on the church. Petit includes some sky and foreground to make an impressive picture. 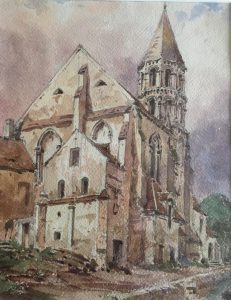 Epone is reproduced opposite p 145 in Architectural Studies in France (1854). Petit points to its fine Romanesque tower, the wide timber-roofed nave and combination of round and pointed arch styles to be found. It is typical of his better sketches, far from the commercial watercolours of the period, but conveying the vulnerable beauty of ancient churches.

While on the trip researching and painting for Architectural Studies in France, Petit was invited to become a Fellow of the Society of Antiquaries. For his admission Petit submitted a separate paper on perhaps the most interesting church of this trip, the partly subterranean St Radigonde, in Tours. This is one of the four drawings reproduced in that paper (and presented and later reproduced as a posthumous article in the Archaeological Journal). Not commercial art, but interesting none the less. 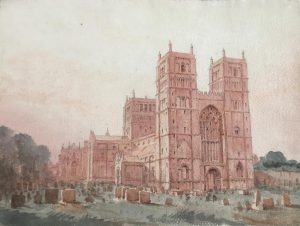 Southwell features in Petit’s first book and in a speech delivered to the Archaeological Institute at its Lincoln meeting in 1848 subsequently published in their Transactions. The published illustration is from a different angle, and not all illustrations presented were published. 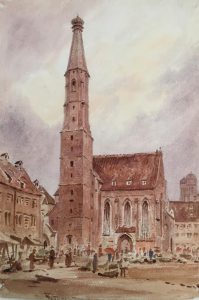 There are more continental pictures during this later period, because Petit travelled frequently, especially in France, often wintering there with members of his circle. As a sketch this is rather better finished than many but still lacks sky or range of colour. At a guess the limited palette made for simpler logistics during his sketching tours, and the reddish tone was an excellent base for various architectural shades. 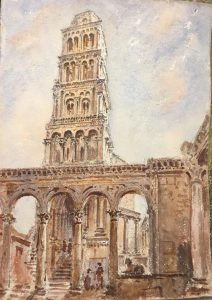 Petit journeyed down the Adriatic coast in September 1857 for a brief trip to Corfu, Athens and Constantinople, doing about 220 sketches in a little 3 months. Later he wrote a speech for RIBA in 1858 and articles in the Archaeological Journal on Byzantine architecture in Corfu, Greece and Turkey, but the earlier Adriatic sketches did not quite fit. The Cathedral of Saint Domnius, consecrated at the turn of the 7th century AD, is regarded as the oldest Catholic cathedral in the world that remains in use in its original structure, without near-complete renovation at a later date (though the bell tower dates from the 12th century). The structure itself, built in AD 305 as the Mausoleum of Diocletian, is the second oldest structure used by any Christian Cathedral